Bicycle trailers for SUPs - Which model is the right one?

An afterwork SUP session out on the lake? For stand-up paddling enthusiasts, it's not a question of wanting to, but rather of logistics. reacha has at least three trailers in its range, with which you can take your SUP to the nearest lake at any time by hand or bicycle. We have taken a closer look at the models and explain the differences: they are less in price, but more in use.

Stand-Up paddling is basically a healthy hobby: lots of fresh air, often in the middle of nature, out by the lake, far away from the noise of civilisation, paddling comfortably without stress, or getting the heart pump going - just when coming (i.e. to the lake), it can be more harmful for your health. Carry the SUP? Bad for the back! Transport it by car? In times of Greta Thunberg? Bad for the lungs and for the environment! With public transport? Possibly, but bad for the other passengers!

2. The solution? Wheels, bars and tyres!

3. Common features of the SUP-bike trailer

3.2 Sufficient space - even for several SUPs

4. Differences of bike trailers for SUPs

5. Conclusion: Which SUP bike trailer will win the race? So you did go by bike? After all, that would be the most climate-friendly way to ship your SUP to the lake to indulge in water sports. Even if you own a car and even if you get one of the last parking spaces at the crowded lake, the car for transporting a SUP would have to be quite big, more like a bus, or at least have a roof rack.

Even when leaving the climate topic aside: SUPs are big, the up to 14 feet long Race SUP boards are even bigger, and with a normal-sized car the transport is simply very stressful. The founders of reacha have recognized this early. They are passionate SUP fans / surfers themselves and did not feel like taking their boards to the lake or beach with kayak carts anymore, that were too small or unwieldy SUP trolley.

The solution? Wheels, bars and tyres!

They were looking for a new, useful solution, founded their own company good goods tegernsee at Tegernsee (in Bavaria) and without further ado developed one bike trailer to transport SUPs simply and quickly. Actually, the trailer also works without a bicycle, as a hand trailer. And actually, you can transport many other things with the trailer - especially other sports equipment or equipment for windsurfing or kayaking. And actually the reacha founders did not only develop one bike trailer for SUPs, but four hand or bicycle trailers: reacha SPORT with 20" compact tires, reacha SPORT with 20" beach tires, reacha SPORT with 24" street tires and reacha PRO.
Depending on what SUP fans value the most, where they go for water sports and what they want to transport with their bike trailer, different models come into question. In the following we point out the similarities and differences.

Common features of the SUP-bike trailer But if you are already pedalling your bike for the sake of the environment, then the question naturally arises where the textile loading areas and the aluminium frame actually come from and especially: are the materials produced sustainably (and regionally)? First of all, the reacha founders decided to keep the use of plastic to a minimum. All plastic parts used are made of injected carbon, which is mainly made of recycled material from the aircraft industry.
The first prototype was even made from old bicycle tires from the scrap yard and was assembled from a used wooden frame and an old windsurfing boom. From this prototype we developed the first bike trailer of reacha - the reacha DIY, Suitable for all those who want to "upcycle" their old bicycle tyres again.
Today, however, the aluminium frame is produced regionally by the surf boom manufacturer CTM in Rosenheim, which has years of experience in aluminium tube processing.

Sufficient space - even for several SUPs

And if some of the reacha-bike trailer still come without additional side loading brackets, the Bows can be retrofitted to any model at any time, so that more loading space is available. In general, the modular components are individually adjustable in length and width. This means that they bike traileroffer space for SUP boards up to 14 feet long (which corresponds to approx. 4.26 metres) and can transport up to 35 kilograms - so if necessary, several boards can be transported. The notable differences are rather in the details.
Who wants to secure his SUP particularly well can also take a look at the neopren-covers as well as the specially developed straps. This keeps your SUP extra safe on the way to the lake!

Differences of the bike trailer for SUPs

The simplest version, the reacha SPORT with 20" compact tires, is characterized by a lower price for the time being. Thanks to its lightweight aluminium frame and modular plug-in system, the reacha SPORT is very easy to assemble and disassemble and can therefore be stored in a space-saving manner. The 20" wheels provide a useful combination of agility, suspension and packing size. If you don't want to reach top speeds when cycling and don't want to ride through unpleasant terrain (e.g. sand), the reacha SPORT with 20" compact tires is perfectly adequate for you.

The bike trailer reacha SPORT with 20" beach tires is different: This hand-held and bike trailer suitable for all those who like to go "off-road" with their SUPs, surfboards or other outdoor sports equipment. Thanks to the Fatbike tyres, you can easily pull loads of up to 60 kg through sand, gravel or dirt roads. Its aluminium frame is extremely stable and is equipped with a bow on the sides there is space for SUPs and other luggage: e.g. backpacks, paddles, tents and, and, and.

For professionals - in the sense of professional stand-up paddlers - the reacha PRO was not specifically developed. The "pro" in the product name rather addresses larger business customers like hotels or surf schools. They can use it bike trailer to transport up to eight SUPs, foam boards, wind or kite surfboards. This is an application scenario that is less common in the private sector. However, the reacha PRO is also used by photographers, filmmakers, craftsmen and other professionals to transport their heavy equipment from A to B. The regionally manufactured aluminium walls give the reacha PRO an extremely high stability. They can even be individually printed, e.g. with your own logo or for other marketing purposes.

There is a simple and a more complex answer to the question of which SUPbike trailer wins reacha the price-performance race. First the simple one: Basically it is a matter of taste. None of the trailers are really cheap, which is not surprising: After all, you reacha pay for quality and regional, sustainable production. This is noticeable in the price. But if you calculate the costs on the long shelf life of the reacha-products then the price is no longer a downer.
Finally, the complicated answer: Hotels, surf schools or water sports providers who rent SUPs or other equipment in large quantities can only choose the reacha PRO - after all, it was specially designed to transport several SUPs, or surfboards. For private use it is more a question of where to go, how to get there and what to transport. As described, the Hand- and bike trailer reacha SPORT with compact tires, reacha SPORT with beach tires, reacha SPORT with street tires and reacha PRO were each developed for own, genuine purposes.
And in the end the choice is not that decisive anyway, especially if you consider the biggest advantage: You don't have to inflate and deflate your SUP boards directly on the water, because all reacha models transport even the largest SUP boards easy in full size. This saves you the greatest good that you have: time. Maybe even enough time to take a closer look at the individual models on the respective product pages ;)

What our customers say

Simply great! Tow 2 SUPs behind the bike to the lake, without having to assemble forever beforehand. Nothing grinds, nothing jerks, nothing slips. 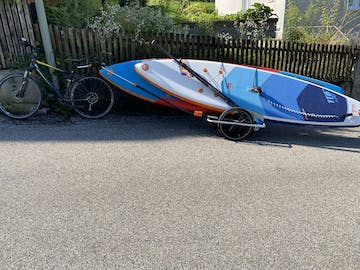 Bicycle trailers for e-bikes and pedelecs

In this article we explain to you the most important information about bicycle trailers on e-bikes. Which trailer fits which type of e-bike. Which legal aspects you have to pay attention to and which reacha model is particularly suitable for transport on the e-bike or pedelec.
Mehr lesen

A bike trailer will help you in many situations. Especially for surfers or paddlers, a bike trailer from reacha is the perfect travel companion. Many people think about building a bike trailer themselves. In this article, we present you eight bike trailers to build yourself!
Mehr lesen

Bicycle trailers for surfboards, kiteboards and equipment for windsurfers

With the bicycle trailer reacha beach we offer an emission-free alternative for bringing surfboards, sails and other equipment directly to the water. With its fatbike tyres, it rides easily over sand and gravel and can also be pulled by hand if necessary.
Mehr lesen